Solar energy’s popularity has rapidly increased in the last several years, making a significant impact on the energy market. According to the Solar Energy Industries Association, the U.S. has installed enough solar to power 13.1 million homes and total U.S. solar capacity is projected to more than double by 2024.

As solar energy use becomes more prevalent, so does information about how it’s harnessed and used. Photovoltaic, or solar, panels can often be found in both commercial and residential areas. How are these panels made, and what materials are used to manufacture them?

The table below outlines the raw materials and parts comprising a solar panel. 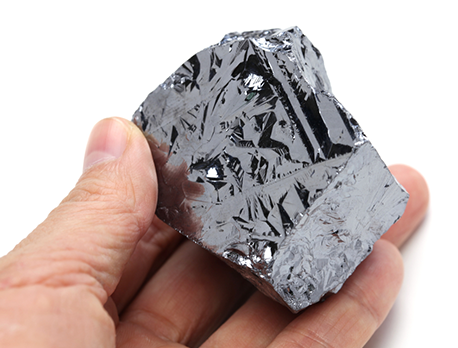 Silicon is the second most common element in the earth’s crust. According to the Minerals Education Coalition, it isn’t found pure in nature; rather, it’s found combined with oxygen in rocks such as obsidian, granite, and sandstone, in a form known as silica. Silicon can be mined from quartzite, mica, and talc, but sand is its most abundant ore source. The silicon in solar panels is manufactured through a reduction process in which the silica is heated with a carbon material and the oxygen is removed, leaving behind purer, metallurgical-grade silicon.

From there, the grade must be further purified into polysilicon, the solar-grade purity of which is 99.999 percent. To yield polysilicons of different grades, several processes may be applied to the element. For electronic-grade polysilicon, which has a higher purity percentage, the metallurgical-grade silicone must pass through hydrogen chloride at extremely high temperatures and undergo distillation. But to yield a solar-grade end product, the silicone goes through a chemical refinement process. In this process, gases are passed through melted silicon to remove impurities such as boron and phosphorus. In its pure form, solar-grade silicon is then turned into cylinders called ingots, which are then sliced into the small conductive pieces that absorb the sunlight in solar panels.

Several types of wafers are cut from the ingots: monocrystalline, polycrystalline and silicon ribbons. They differ in terms of their efficiency in conducting sunlight and the amounts of waste they produce.

Monocrystalline wafers are thinly cut from a cylindrical ingot that has a single-crystal structure, meaning that it is comprised of a pure, uniform crystal of silicon. A diamond saw is used to cut the wafers off the cylinder, resulting in a circular shape. However, since circles don’t fit tightly together, the circular wafers are further cut into rectangle or hexagonal shapes, resulting in wasted silicon from the pieces that are removed. According to GreenRhinoEnergy.com, this wasted silicon can be recycled into polysilicon and recut. Researchers are trying to find ways to create monocrystalline cells without so much cutting and waste.

Polycrystalline, sometimes called multicrystalline, ingots are made of multiple crystal structures. They may produce less waste, but they are not as efficient as monocrystalline. The ingots are cube-shaped because they are made from melted silicon poured into a shaped cast. This means the wafers can be cut directly into the desired shape, creating less waste.

Silicon ribbons are thin sheets of multicrystalline silicon. They are so thin that they don’t have to be sliced into wafers. While the thin sheets, or thin films, are flexible, can be used in interesting ways and are less expensive to manufacture, they’re not as durable as wafers and they require more support than other solar panel structures.

While the silicon wafers are complete at this point, they won’t conduct any energy until they go through the doping process. This process involves the ionization of the wafers and the creation of a positive-negative (p-n) junction. The wafers are heated in cylinders at a very high temperature and put into water. Then the top layer of the cylinder is exposed to phosphorus (a negative electrical orientation) while the bottom layer is exposed to boron (a positive electrical orientation). The positive-negative junction of the cell allows it to function properly in the solar panel.

After this step, only a few more things need to happen in order to create a functioning cell. Because silicon naturally reflects sunlight, there is a considerable risk of losing much of the potential energy from the sun that the cells are supposed to absorb. To minimize this reflection, manufacturers coat the cells with antireflective silicon nitride, which gives the cells the final blue color we see in installed panels.

From there, manufacturers implement a system for collecting and distributing the solar energy. This is done through a silk-screen or screen-printing process in which metals are printed on both sides of the cell. These metals make a roadmap for the energy to travel through on its way to the receiver.

Solar panel manufacturers employ different proprietary processes to produce their final solar panel products. But, in general, this is an automated process in which robots do the work. First, the cells must be put together to form a big sheet. According to Solar World, a leading manufacturer of solar panels, its process involves soldering six strings of ten cells each, making a rectangle of 60 cells. Each rectangular matrix is laminated onto glass and quickly becomes a larger panel. From there, the panel needs to be framed so that it is sturdy and protected from any weather it will endure.

In addition, the framing must house the electrical equipment that links the panels together and receives the energy.

Where Does Polysilicon Come From?

Polysilicon has one origin: silica. Silica is mined from the earth and is found in sand, rock, and quartz. Because silica has a dioxide component, it must be taken to a plant, where it is converted to silicon through a heating process. According to the United States Geological Society, there are six domestic companies that produce silicon materials at eight plants. These are all located east of the Mississippi River. Imported silicon comes from all around the world, including China, Russia, Japan, Brazil, South Africa, Canada, Australia, and others.

How Much Does Raw Silicon Cost?

The most recent data from USGS reports that silicon alloys are a $1.14 billion industry. The silicon metal used in photovoltaic panels cost $1.38 per pound in 2018. According to the USGS Mineral Information Publication, because the production of silicates is so diverse, only a small amount of that industry ties to solar panel creation.

Silicon trends are on the rise and are projected to significantly increase in the next 10 years. This abundant resource comes from numerous countries and has many uses; solar cell production is just one small part. Sources: USGS, U.S. Department of Energy, Semiconductor Industry Association